The Inuit Recognition Award is a national prize that recognizes Inuit who are making strong efforts towards meaningful Inuit involvement in Arctic research. Each year, the award is given to one recipient who has shown excellence in research.  The award is facilitated by Inuit Tapiriit Kanatami, which is the national representational organization that protects and advances the rights and interests of Inuit in Canada.

Inez Shiwak was awarded the prize this year, recognizing her outstanding research leadership and accomplishments in Arctic research.

Ashlee Cunsolo and I had the immense pleasure and privilege to present Inez Shiwak with the Inuit Recognition Award at the ArcticNet #ASM2016. Below is a copy of our speech.

Ashlee: Thank you for the introductions, Rodd, and good evening everyone. I’m Ashlee Cunsolo, the Director of the Labrador Institute of Memorial University.

Sheri: And I’m Sherilee Harper, an Assistant Professor at the University of Guelph.

Ashlee: It gives us great pleasure to be announcing the recipient tonight for this award. We have worked with this individual for 7 years, and can say, without a doubt that she had changed the ways in which we approach and conduct research, and the ways in which we understand the transformative potential that research has to make positive social change, if led by Inuit and responsive to Inuit needs and priorities.

On Tuesday morning, ITK President Natan Obed spoke about the ways in which Inuit bring important diversity and richness to Arctic science and no one better exemplifies this than the recipient of this award.

Sheri: A quick listing of the recipient’s research experience will illustrate this diversity and richness. She has conducted research in food security, water quality, cultural continuity and preservation, knowledge sharing and translation, climate change and health, mental health, and youth engagement. She has conducted research through interviews, focus groups, and surveys, has taken water and hair samples and conducted scientific testing, and has pioneered the use of participatory digital media in the North.

From this research, she has given over 50 oral presentations, participated in over 30 poster presentations, is an author on 15 peer-reviewed publications and 2 book chapters in various roles, with several forthcoming or under review. She has worked on the creation of over 40 digital stories, was a lead on 1 documentary film, and is currently working on another.

Ashlee: While this list of research accomplishments is nothing short of amazing, what is truly impressive is the ways in which others wrote about her in the nomination package. We would like to share some of these quotations today:

“From a member of the federal government: “Overall, I know [her] to be an incredibly talented researcher and exceptional person. What she has done, and is currently doing, for Inuit-led research in the North not only benefits research and government, it has powerful impacts for Inuit themselves. [She] provides a model, and a standard, for how community-based research should be conducted, and has demonstrated time and time again the benefits that can come from research that is designed and driven by Inuit, for Inuit.”

Sheri: From a Rigolet resident: “With [her] at the helm… we can be assured that the benefits stemming from her efforts transcend boundaries beyond academia and into the real-life environment and health issues we are currently facing in our community, and that the benefits are sustained into the future. …I am honoured to be able to work so closely with [her]. She embodies the spirit and strength of our community, and she plays an influential role in inspiring this spirit and strength in our youth so that it is perpetuated and sustained for years to come.”

Ashlee: From a government partner: “Research priorities and concerns in the North must be put forward by Inuit communities themselves, and these communities must have control over the development and direction of all decisions and actions. Not only is [she] a talented researcher and respected leader in her community, she is an advocate for collaboration between governments and Inuit stakeholders to develop and evaluate culturally-acceptable and effective research and knowledge translation. … [Her] efforts at the forefront of such research create a shared sense of political and cultural resiliency and self-determination among Inuit in Canada. Her work is a testament to the importance of Inuit autonomy and control over their own research and for sharing information with others in the hopes of creating further awareness and policy change.”

Sheri: And finally, from one of the many graduate students with whom the recipient has supported and mentored: “As researchers, we are unbelievably fortunate for the openness, kindness, thoughtfulness, and knowledge that she shares with us. It is people like [her] that are changing research for the better, one reflection, decision, project, and grad student at a time. … She is open, kind, and supportive of students doing work with the community, and she never ceases to amaze me with her dedication to being involved in Arctic research. It is truly inspiring to see this happening in my journey as a young researcher, and I know that these experiences have positively impacted by own development, and will carry forward as I continue in my career.”

We are incredibly privileged to work with this individual, and are so thrilled that her wonderful work and contributions, which are done with great humour and much humbleness, are recognized with this award.

Ashlee & Sheri: It gives us great pleasure to announce that the 2016 recipient of the Inuit Recognition Award is Inez Shiwak, from Rigolet, Nunatsiavut! 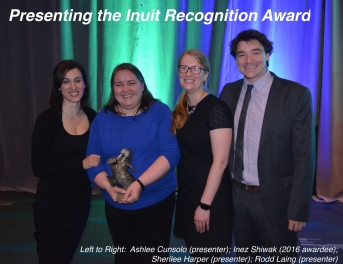 View all posts by Ashlee Cunsolo